Modern Olympic Fencing Vs HEMA: What Are the Differences? 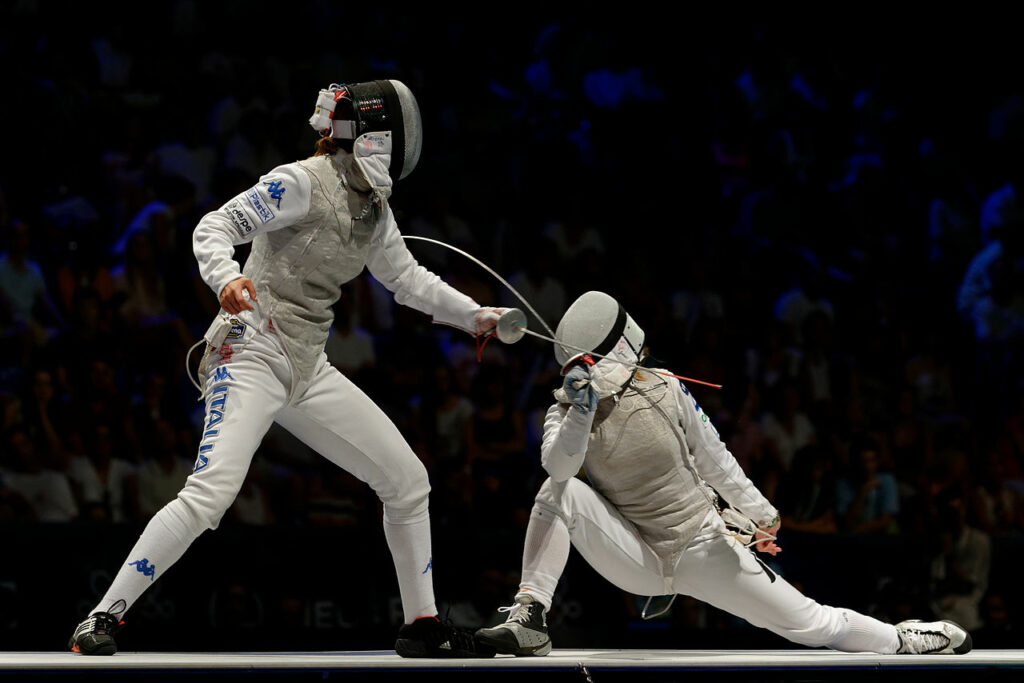 However there are also a lot of differences between historical fencing and Olympic style sport fencing. The rules are different and the weapons are different. It is popular for people to believe that contemporary sport fencing is based on rapier fencing but this is inaccurate for several reasons which we have already explained in detail in our other article, “What exactly is a rapier?” which we suggest you read for further information about these differences.

Contemporary fencing is largely based on historical small-sword and military saber fencing practices from the late 19th and early 20th century.

Yet even if you compare the modern foil and saber fencing events to their original 19th century counterparts, it is plainly evident that the weapons used today by contemporary sport fencers are far lighter and more flexible than those made a century ago, which allows for movements with modern fencing weapons that are not possible using practice weapons from the early 20th century.

Matt Easton of Schola Gladiatoria has a video on his YouTube channel demonstrating these differences. It is worth a watch.

As another example, a commonly used offensive technique in Olympic foil events is the ‘flick’. This movement utilizes the flexibility of the foil to strike at targets a historical small-sword could never do, such as the back of their opponent while still standing in front of them There is no historical swords which can do this kind of movement as historical swords of all kinds have very rigid blades.

I mentioned rules before. Modern Olympic fencing usually does not concern itself with defense anywhere near as much as HEMA fencing does. Olympic fencing is structured to prioritize the awarding of points to whoever can strike first and after blows are ignored. Here is an example of an exchange where the person who ‘won’ is also the person who got thrust multiple times into their torso. If this exchange had been done with real weapons both contestants would probably be dead.

Here is another example, starting at 1:56 in the video.

If you are having trouble still visually understanding that the weapons used in modern sport fencing are very flexible then take a look at this video which uses high speed cameras to create slow motion videos and rotoscoping to create a visually impressive display of what the action is like during a sport fencing match.

Again this is a sport that requires a high degree of athleticism and which does descend from arts that used swords. But it is different than what historical fencing is.

The kind of ruleset used in modern Olympic sport fencing has turned it from a game of swordplay into a game of tag. It is a game that requires a high degree of athleticism in order to play tag but it is not swordsmanship.

So what are the big differences in Historical European martial arts based fencing?

In contrast to contemporary sports fencing, in HEMA fencing competitions points are often voided if an opponent is able to strike you within seconds of being hit by you, meaning no one wins the exchange. This counter-attack that results in loss or voided points is referred to as an ‘afterblow’.

Historical fencers are expected to deal a blow from a point of advantage where they cannot be countered and people that abandon their own defense are not rewarded for this suicidal behavior.

Historical swordsman also do not fight on a peste, but instead in a larger amount of space more similar to what MMA athletes use as a fighting arena.

Lastly the third main difference is that historical fencers use weapons intended to simulate historical weapons. This means there are many more types of weapon events for people to compete in as compared to contemporary sport fencing. Grappling events can also be part of HEMA tournaments, and in weapon matches themselves disarms and throws can be transitioned to from the bind (when two swordfighters cross blades in close proximity to one another).

These three differences — priority placed on good defensive techniques, a larger space for fighters to maneuver inside and a more versatile arsenal of weapons to compete with — creates a very different kind of fencing performance for spectators than exists in contemporary sports fencing. This video highlighting match footage from the Swordfish 2017 event showcases this.

The fighting displayed here is not the same spectacle as that seen in theatrical stage fencing such as used by popular TV shows and movies, but it is still very elaborate, complex and requires high degree of athletic ability to compete at high tiers of talent.

Table of Contents hide
1 Why Explain These Differences?
2 Is the sportification of fencing really a new thing?
2.1 Related posts:

Why Explain These Differences?

The purpose of this article is not to take away from modern fencing. There shouldn’t be anyone who seriously believes that a weapon much lighter and far more flexible than historical weapons, and where fencers can still win a match even though they got counter-attacked for every point they make is historical fencing. No one would have lived to teach fencing if that is how historical fencing was taught and used.

The intention behind pointing out the differences is because some people who are uneducated about HEMA think that contemporary sport fencing is “superior” to historical methods because it is newer. So we are trying to simply explain the key differences between modern sport fencing and historical fencing traditions. It is impossible to discuss them without pointing out the areas where modern fencing is not aligned with the values and principles of the traditions it descends from as, the entire reason people study historical fencing is because they want to engage in sword fencing as close to that practiced by the old masters. You cannot learn this type of fencing in modern gymnasiums.

Is the sportification of fencing really a new thing?

It might seem that the sportification of fencing is a relatively recent phenomenon but that is not case. The evolution of martial fencing into a sport for leisure and amusement is discussed by several masters in various source material that we possess dating back to the late usage of the small sword. Even prior to this masters such as Meyer held tournaments using feders where the usage of the thrust was not allowed as it was deemed too unsafe. There is also the tradition of academic fencing between fraternities on college campuses which is a kind of sport as well.

HEMA itself incorporates a sport aspect to it as we utilize equipment designed to protect ourselves from damage we receive from blows, and we engage in duels in an environment with structured rules and referrers, and where an engagement ends upon a successful single blow. Depending on the event grappling may or may not be allowed despite grappling being part of historical fencing practices. This is all sport behavior and in this regard modern fencing and historical fencing events are very similar. They are both practiced for leisure and exercise, and contests are created to test the skills of fencers. The difference between sport fencing and HEMA events lies in the rulesets that are used, and this includes the types of weapon simulators that are used.

In HEMA the federschwert (nicknamed ‘feder’) is a simulator for a long sword. As it is a smooth edged blade without a sharp edge it cannot grip or cut into the edge of an opponent’s blade during a bind; this is safer to fence with but it does change the nature of sword fencing with longswords in a subtle but noticeable way.

Likewise other blunted weapons used in HEMA ranging from long swords to sabres also lack edges and have difficulty biting into blades, making a subtle change to how the techniques work. This is sporty, too.

We hope this article has answered any questions you had about the differences. If you have more questions or feedback feel free to comment down below.