The Johannes Liechtenauer tradition and the German School of Fencing 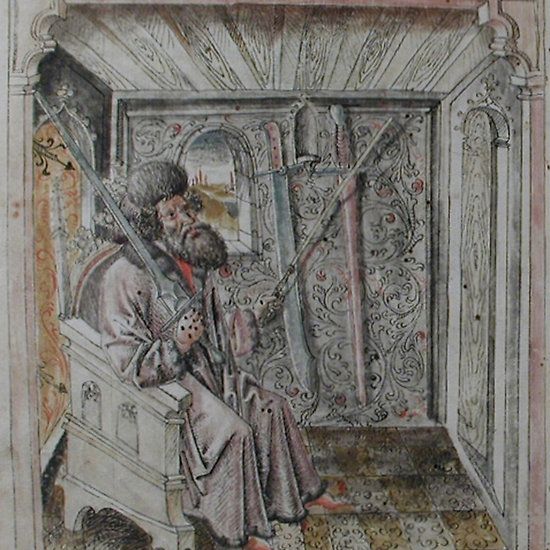 In this article we will discuss what is currently known about the origins of the Liechtenauer tradition of historical German sword fencing which is heavily studied by many HEMA schools. It is a very popular subject within the study of historical swordsmanship martial arts.

Table of Contents hide
1 What Is Meant by ‘German Longsword’ in the Liechtenauer fencing tradition?
2 A Knightly Tradition of Combat
3 Related posts:

What Is Meant by ‘German Longsword’ in the Liechtenauer fencing tradition?

The origins of the Liechtenauer tradition of German fencing are at present shrouded in mystery. The label of ‘Liechtenauer tradition’ is named for Johannes Liechtenauer, a German fencing master who lived sometime in the 14th or 15th century. Liechtenauer is attributed as having created what is referred to as the ‘Recital’ (Zettel), a series of cryptic instructions for how to use a variety of weapons appearing in the form of a long poem. The poem is designed to prevent those who do not understand the true meaning of its words to be able to understand the instructions, and also serves as a kind of mnemonic device intended to assist a fencer in remembering the plays of the tradition.

Many of the authors of Liechtenauer manuscripts are believed to be associated with the Brotherhood of Saint Mark (Marxbrüder), a fencing guild that enjoyed a state-sanctioned near total monopoly on the professional teaching of sword fighting in the Holy Roman Empire from 1487 until 1570.

We discuss the various masters of this tradition at some length on our Path of the Long Sword page which lists many of the various manuscripts that have been translated into English and are available for study. For this article we’ll focus more on some of the history behind the Liechtenauer tradition itself with a summary of the basics.

Very little is known about Liechtenauer himself.  It is not even known exactly when his ideas were first written down.  Part of this is due to the fact that nothing which Liechtenauer himself may have written has survived to present day (or at least, has yet to be discovered). Rather his lessons and knowledge of swordsmanship were passed down by others who attributed the fighting style they described as originating with him. Yet by reviewing the books that have his Recital in them and also examining additional surviving writings from the period the context behind the instructions becomes clearer.

Here begins Master Lichtenauer’s art of fighting with the sword, on foot and on horseback, bare and in armour. And before all things and matters, you should perceive and know that there is only one art of the sword. And this art may have been invented and conceived some hundreds of years ago. And this art is the base and core of all arts of fencing. And Master Lichtenauer possessed and mastered this art wholly, completely and accurately. Not that he had invented and conceived it himself, as it is written before. But he has traveled and searched many lands because of this justified and true art which he wanted to learn and know. And this art is serious, complete and justified.

A Knightly Tradition of Combat

There is one important detail which holds promise in shedding some light on the origins of this fighting tradition. There is a group of seventeen masters referenced as the ‘Fellowship of Liechtenauer’ in several of Paulus Kal’s manuscripts, but no real further information is given for what this Fellowship actually was. Given the time period that Liechtenauer is believed to have lived it is speculated by some scholars that the Fellowship of Liechtenauer may have been a company of soldiers who participated in the Hussite Wars, which were a crusade against the Bohemian Hussite rebellion and during which soldiers from all over the Christian world descended to attack the rebellion as crusaders.

This is all speculative of course, although the explanation would solve one troublesome detail among the Recital manuscripts, which appear to be written by men who were not nobles, yet they typically make references to knighthood and chivalry within their writings. Although the authors were seemingly not knights in the proper sense of the term and social class, if they had answered the Church’s call for crusaders they may have viewed their companies to be in the same vein as crusader orders such as the Templars and Hospitallers. Although it would not make them knights in terms of social ranking it would confer on them a degree of prominent reputation as well as support self-identification as someone following knightly ideals in the same spirit as the crusader orders who came before them.

What we can be certain is that those who wrote books in the Liechtenauer traditions believed that only those who were worthy per their knightly ideals deserved to learn this fighting style. Thus the knowledge was kept largely secret, the instructions of techniques hidden in poetry using jargon that could only be deciphered by those already in the know, to deliberately hide knowledge.

Christian Tobler has argued that the first written version of Liechtenauer’s ideas on swordsmanship probably came out in the early 15th century, around 1400.  From surviving material it is known that Liechtenauer’s direct contributions at the time focused on three specific areas: longsword on horse, longsword on foot with armor, and longsword on foot without armor. There are about 350 verses about the longsword in his Recital. Tobler comments that the verses as poetry in themselves are poor, but they must have been effective since they persisted for so long and were used by many authors. The poetry therefore is a good mnemonic device.

Although we know little about Johannes Liechtenauer the man at present, his ideas have survived long after him. The techniques and strategies attributed to him formed the basis for longsword fighting well into the 16th century, even when the fighters shifted from the nobility to the upper middle class, and the purpose of sword fighting changed from killing in battle to more of a competitive sport for tournaments. Moreover, the Liechtenauer Tradition that grew out of those verses expanded the tradition as inheritors of his knightly tradition of fighting built on his ideas, and several even moved beyond his three areas of focus to include other weapons such as the dagger, dussack, polearms and such. Joachim Meyer, a late student of the Liechtenauer tradition, even included plays with what we call today a “proto rapier”, something between a side sword and a rapier in its design.

Other additional weapons featured in the Liechtenauer tradition manuscripts also have descriptions and illustrations of buckler fighting, where one fought with a short shield over one’s hand. Bucklers had a variety of designs and some even came with short spears attached. Thus, they could be weapons in their own right.

The fencing described in the Liechtenauer tradition seems primarily focused on judicial duels and we know that at least several authors of books in this tradition were judicial duel instructors. In a judicial duel the court approved of and supervised duels in order to resolve disputes between parties.  Judicial duels were regulated, as there would be representatives of the court watching, with each side having their ‘second’ man to mediate for them, as well as other officials.  These were duels to the death in many cases.

The Liechtenauer fechtbooks have been mostly ignored by other scholars of medieval European history until recent years, as the HEMA movement took wings and gained strong momentum. This has brought more interest into the study of these manuscripts. The material is now coming to be more appreciated for its value not only to martial arts study but for providing deeper insights into the world these people lived in during the Late Middle Ages and the Renaissance. Recent scholarly work has indicated that Liechtenaeur’s Recital coincided well with the science of Aristotle, even though a whole millennium separated the two.  Liechtenauer’s ideas of timing and motion very much resemble the ideas of Aristotle.  This proves that Liechtenauer’s appeal is not just one of good fencing, but also one of good physics.

We’d like to end this article with a focus on one of the key authorities on this topic: Christian Henry Tobler is a long-time student of the Liechtenauer Tradition and efforts to reconstruct it in modern day. He has published several books on the topic. He has also taught about this fencing style at a wide variety of schools as a guest instructor.  His major contribution to historical longsword fighting includes books that serves as training manuals for new students to the tradition. Tobler is one of the best published authorities on this tradition and is very passionate about it, and we recommend his books.

A further detailed summary of the timeline of manuscripts written in the Liechtenauer tradition that teach swordsmanship (with direct links to English translations of these books) can be read on our Path of the Long Sword page.

Notes from a presentation by Christian Tobler. [Online]. Available at: https://www.youtube.com/watch?v=idT3ytMMLwo

We hope this guide helps you start your journey into learning historical sword fighting and learning more about the tradition of Liechtenauer.