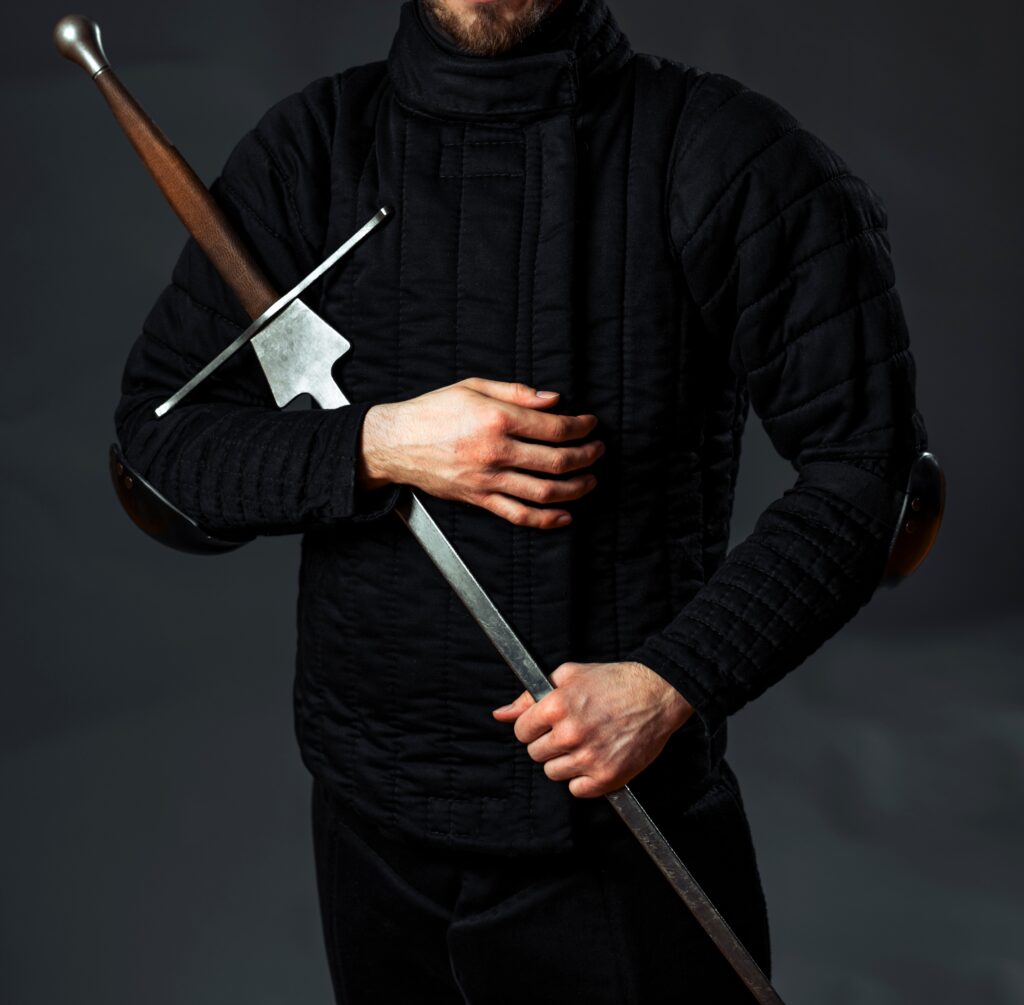 HEMA is an abbreviation for Historical European Martial Arts. These are the fighting styles of Europe as practiced historically by people living in these regions and countries with a special emphasis on weapons based combat — especially using swords. HEMA is popularly associated with sword fighting styles of European peoples, ranging from medieval swords to rapiers to military sabres, and even the small swords. But HEMA also covers fighting with other weapons such as daggers, staffs and polearms, and even grappling arts. That said European sword martial arts are the most commonly studied types of fighting within the HEMA community, using specialty fencing swords depending on what kind of sword style you are studying.

We previously covered this topic in our article, What is Historical European Martial Arts but here is some additional information for you about HEMA.

Table of Contents hide
1 HEMA is a Modern Martial Art Movement
2 How Do you Learn HEMA Sword Fighting?
3 Why Study HEMA as a Martial Art?
4 How Popular is HEMA as a Sword Martial Art?
4.1 Related posts:

Most of the fighting styles studied in the HEMA community are “lost martial arts”; those which have no direct lineages anymore, with the last masters of their arts having died a hundred or more years ago without passing on their skills to successors. This means the majority of martial arts studied in HEMA are modern reconstructions based on scholarly study of surviving dedicated technical treatises and martial arts manuals that describe these lost martial traditions, using methods of investigation and experimentation outlined in the research paper, A Proposed Methodology for the Validation of Historical European Martial Arts Reconstructions by Brian Price. In a way HEMA is a type of experimental archaeology that has been adopted as a recreational sport and hobby by many people interested in European martial arts.

Some of these source manuals of sword martial art fighting traditions date to the Late Middle Ages, Renaissance and the early modern period of European history. There are also people within the HEMA community who have made attempts to reconstruct even older arts based on documentation of the fighting methods of classical antiquity, such as Greek wrestling, gladiatorial combat or Roman infantry tactics.

from Fencing GIFs via Gfycat

How Do you Learn HEMA Sword Fighting?

Our website, Historical European Martial Arts Resources, or HEMAR, specializes in providing information for the HEMA community such as reference lists of books, manuscripts, tutorials, YouTube channels, websites, social groups and other kinds of information of interest to those who study HEMA. Several major sections of our website provide links to these resources.

The Guides section is an overall of most of the articles on our website, ranging from topics such as differences between HEMA and other Asian martial arts, to advice about what kind of training equipment you need to get started in HEMA.

The Learn Weapons section breaks down the source manuals for how to learn different kinds of fighting styles studied in HEMA, mostly by weapons like a long sword or a rapier, or even horseback mounted combat. These are all focused on sword martial arts.

Our HEMA Club Finder section is an application that loads in your browser, providing a way to search for local clubs near you. You can filter schools by options, such as what types of weapon traditions the club teaches and how far away the school is from your home address.

Check out our articles, How to learn HEMA and How to Learn HEMA When There is No Club Near You for additional resources on how to learn sword martial arts from historical European martial art schools.

Why Study HEMA as a Martial Art?

Many people are attracted to the idea of studying historical swordsmanship due to depictions in popular media such as fantasy novels, comics, television, movies and video games. Some people also have an interest in military history that leads them to desire to study the usage of antiquated military weapons such as swords to better their understanding of how warfare was conducted during these time periods.

Mostly people study Historical European martial arts (HEMA) because sword fighting is a fun hobby that provides excellent physical exercise. While it is doubtful that swords will ever have supremacy in the battlefield again, this weapon’s place in martial disciplines are solidified. Swords hold an important place in the human psyche and training a person to use one can both improve self-esteem and health.

How Popular is HEMA as a Sword Martial Art?

Historical European martial arts (HEMA) is a worldwide phenomenon practiced by people on every continent, not just Europe and the Americas, although it is most popular in these regions. The internet has made it very easy for information about HEMA to be circulated and translated into several languages, and international shipping to allow for specialty equipment to be purchased from countries where manufacturers are based.

There are HEMA clubs in Asia, South America and even Africa studying European medieval martial arts. That said, the vast majority of clubs are based in Europe and North America, with individual members belonging to a dozen different organizing bodies depending upon what country and club they are affiliated with.

If you’d like to learn more information about historical fencing practices please check out our Learn HEMA page for a guide to learning about the historical weapon that interests you. You can also find more guides we’ve written about other topics at our Helpful Guides page. We also have forums available for people to discuss HEMA with others.