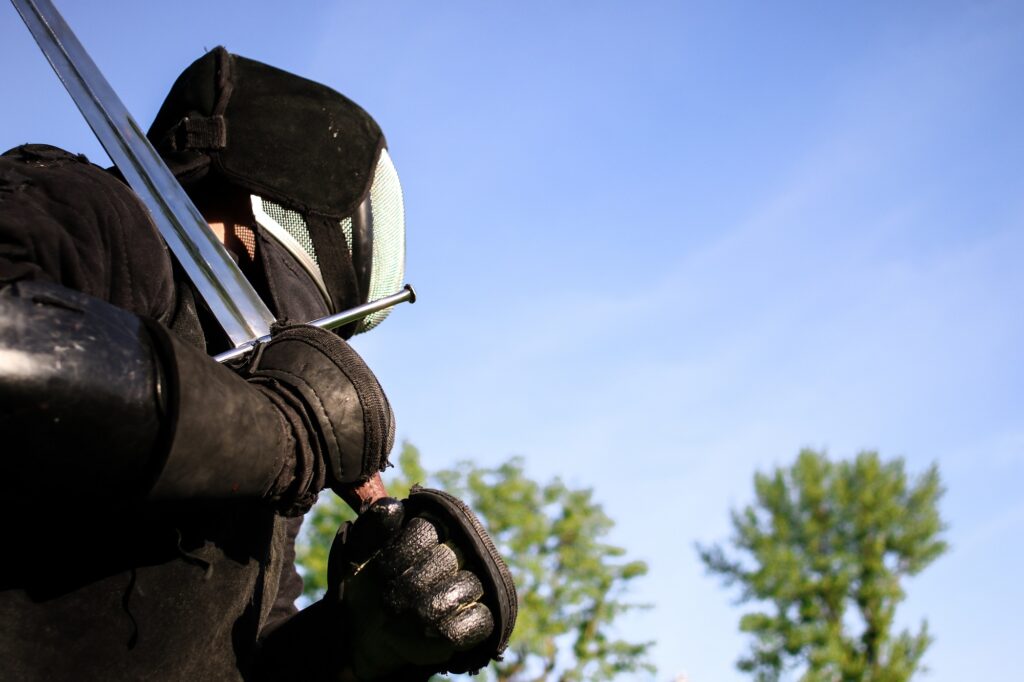 If you are looking for good sparring swords for HEMA medieval sword fighting training then you’ve come to the right place to find these weapons. Medieval sword training in HEMA, or Historical European martial arts, is mostly focused on studying longsword techniques and styles of swordsmanship. Yet there are also people who study other types of swords, such as arming swords (also called a knightly sword) and messers (also called a Lange Messer).

What are training swords called in HEMA?

It really depends on what martial art you are studying; in Japanese Kendo, for example, swords can be called shinai or bokkens, depending on the type. Likewise within HEMA a training sword can be called three different types,

A federschwert, also nicknamed as a ‘feder’, is german for ‘feather sword’. This is a specialty steel sparring sword for studying long sword (and sometimes arming sword) techniques, which is designed to bend when thrusting an opponent. The blade is still made of metal and can harm others if the proper protective equipment is not worn.

A blunt is a type of sparring practice sword that is basically just an unsharpened sword blade. These swords do not have blades that bend in the thrust and are less safe for free style sword playing sparring with. Blunts are less common to see used in HEMA clubs unless the fighters are practicing armored combat wearing steel armour (harnesfechten / harnischfechten, translated into English as “fighting in harness”). Blunt swords are therefore more commonly used for Burhurt events and usually do not get used at HEMA tournaments which focus on unarmored combat (blossfechten / Bloßfechten).

A waster is typically applied to a wooden sword but with the emergence of synthetic nylon sword blade trainers for sparring the term ‘waster’ has also been applied to them, too.

You should keep in mind that some types of swords in HEMA also have steel blades that bend in the thrust yet are not referred to as a federschwert within their own context; an example are rapier training blades used for sparring. These blades also bend in the thrust (unlike a real rapier blade which is very solid to maximize thrusting power) but are no called a feder because they are not long sword style weapons. Equally bendable rapier blades are not referred to as foils or epees, as these weapons do not simulate rapier blades, either (it is a widespread misconception that Olympic fencing simulates rapier fencing; it actually simulates smallsword and military sabre fencing as practiced at the end of the 19th century).

Sparring swords used in long sword training are called federschwert, also nicknamed as ‘feders’ within the HEMA community of sword fighters. We talk about feders in more detail in our article Best Federschwert To Buy for HEMA but here are a few recommendations to give you an idea of what is available.

Arming swords are frequently studied by those interested in sword and buckler fighting. Bucklers are small hand held shields that were typically used as a companion weapon with a one-handed sword such as an arming sword.

Lange messer type swords, also called a messer for short hand, are another popular medieval type of swords studied within the HEMA fencing community. We talk about messers in our article, How to Use a Messer in HEMA but we’ll make some recommendations of messers here to give you an idea of what they are like and what is available.

What About Wooden Sparring Swords for Medieval Sword Fighting Practice?

Despite misconceptions wooden sword (also called a waster commonly) are not typically used for modern day sword fighting practice. Even historically they were less common, although messer training did use wooden training swords for this particular weapon practice. The reality is that many techniques for long sword and arming sword cannot be properly simulated with a wooden sword blade because wood does not have the same properties as steel, especially in regard to simulating how edges grip together on sharp swords during the bind. The other problem is that wooden sword blades cannot bend, so it makes it more difficult to practice thrusting techniques. Steel practice sword blades for long sword and arming sword are designed to be more flexible than real sharp swords, and their blades can bend when thrusting.

That said there are people who use nylon sparring swords that somewhat simulate steel, or at least simulate it better than wood does, and their blades can also bend in the thrust, too.

Are there more types of practice weapons used in HEMA?

Yes, and we have a directory of many of them over at our HEMA products directory page, with direct links to many of the weapons you can purchase from assorted vendors.

You can find many other kinds of products at this directory page, too, not just sparring weapons.

If you’d like to learn more information about historical fencing practices please check out our Learn HEMA page for a guide to learning about the historical weapon that interests you. You can also find more guides we’ve written about other topics at our Helpful Guides page. You can also join the conversation at our forums.