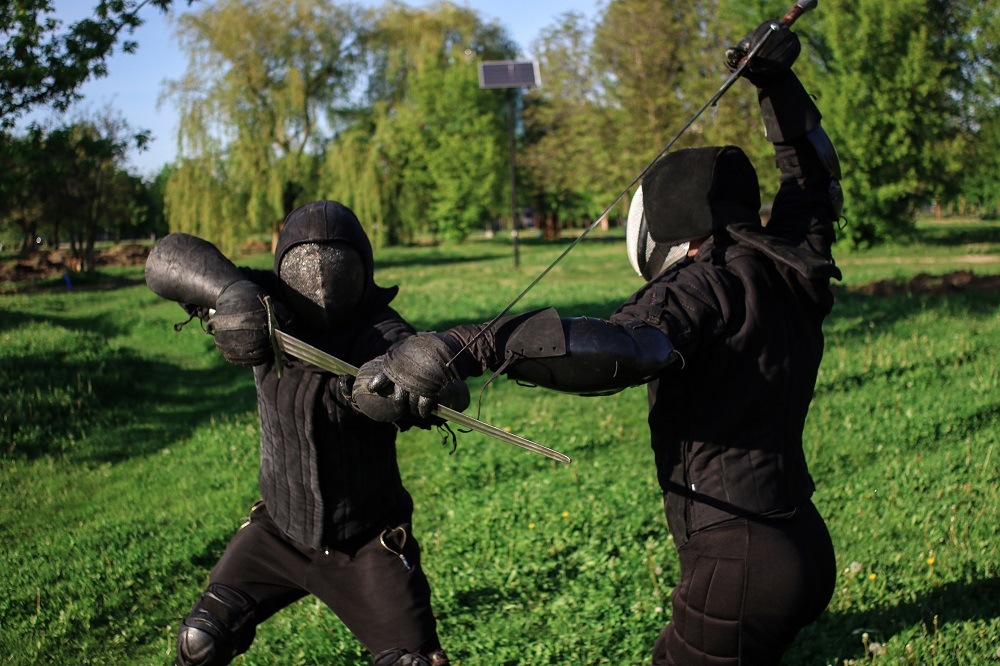 The question “Is sword fighting good exercise?” is a complex one. For one thing there are many different activities that the term “sword fighting” can encompass. Many cultures have their own variations of fighting with swords, and they include many varying activities. Regardless this article will discuss several of the most popular kinds of sword fighting still practiced today and give an overview of some of their benefits as a form of recreational exercise and sport. Unlike many articles you may find on this subject we’ll talk about HEMA sword fighting, as that is what our site Historical European Martial Arts Resources is mainly about.

Something that weapons-based martial arts do very well is further refine your body’s natural ability to use tools as a sensory extension of itself. This is something that unarmed forms of combat are not as effective at developing but can be extremely useful in daily life, depending on your profession of course.

As for the type of workout you’ll be getting, it will vary slightly depending on the variation of activity you choose. These variations deliver varying results, nearly entirely dependent on whether you’re searching for an impactful cardio or strength training workout.

In general, any of these sword fighting martial arts will provide an excellent fitness workout as they require utilization of all the major muscle groups of your body in order to perform well at these sports.

Historical European Martial Arts, or HEMA, is the revival of the historical forms of swordsmanship. In HEMA the styles of sword fighting that grandfathered modern Olympic fencing are practiced. While these traditional martial arts spanned a variety of European cultures over a period of roughly 500 years, from 1300 to 1800, the amount of documentation available about these arts vary widely from one another. As a consequence these martial sword arts have nearly been forgotten in the modern age, having instead inspired modern Olympic fencing. Yet through the dedicated work of many scholars and hard working athletes they have been revived for present day people to learn at many schools around the world.

What is HEMA Sword Fighting?

HEMA covers many different disciplines and is more of a broad label to describe many different styles of martial arts that were practiced by ancient European people. Encompassing one-on-one combat of the time, HEMA swordsmanship from these past eras was entirely dependent on many and varying types of swords. From daggers to longsword, spears to halberds, the art of swordsmanship was vast and varied.

Over the course of hundreds of years many generations of European people saw the basis of these martial arts transform. What started as styles meant for resolving disputes (such as trials by combat and duels on horseback) transformed into a highly scientific dueling art form during the Renaissance.

These eras saw fencing and dueling become more performance oriented and emphasized precise movements over brute force. Towards the 19th century and with the age of industrialism on the horizon, HEMA swordsmanship became more of a pastime enjoyed by the upper classes desiring to hearken back to the past, rather than as a form of military combat.

The invention of firearms completely changed the way combat was performed, thus the changed nature of warfare has relegated swordsmanship to an enthusiast’s hobby and making it somewhat more obscure in recent times.

Modern practices of HEMA sword martial arts generally emphasize what is still known about Medieval and Renaissance swordsmanship based on study of surviving manuscripts that document these martial traditions. That being said there are still variances in the way modern HEMA sword fighting is practiced today.

What sort of training results you’ll get will likely come from the sort of swordsmanship you’ll be practicing. For example, if you choose to use a smallsword it is likely you’ll be focused on moving quickly with a lighter weapon and smaller more refined movements compared to using a long sword.  Because of this you’ll likely see an impressive increase in mobility as your cardio and calisthenic endurance will be put to the test. And while you might initially assume you won’t get a good strength training workout, that’s actually not the case; holding a sword for extended periods of time in a guard and needing to make sudden bursts of speed will tire your arms, shoulders, torso and legs out in a way that builds excellent muscle tone and definition.

That being said, practicing a school of HEMA that emphasizes the use of a rapier will be the way to go for those looking to increase their muscle mass the most, as the awkward difficult to hold positions require the most effort to perform. Doing hundreds of lunges a day are pretty much guaranteed to cause you to lose weight and build muscles able to do explosive bursts of strength on cue.

While not as focused on specific muscle groups, sword-fighting in HEMA can giving you similar benefits to weightlifting while also engaging in a cardio exercise. Depending on the intensity it can be similar to kettlebell training.

Olympic Fencing is the most publicly recognizable remnant of the swordsmanship and fencing techniques of old, although it is a very different kind of fighting compared to historical based styles of swordsmanship. Yet modern Olympic style fencing is still test of one’s patience, accuracy and technique. Olympic Fencing is not for the faint of heart or those uninterested in working hard. It is a very physically demanding sport even if the techniques are no longer based in realistic sword-fighting.

Composed of three major disciplines those practicing Olympic fencing will have to familiarize themselves with each event. These events utilize a different type of weapon with slightly different rule restrictions,

Because of the varied weapon events, participants will have to train widely as the rules for each discipline are very specific. Participants can find themselves losing points easily by confusing the rules and tapping the wrong area of the body during the wrong round. Because of this, most Olympic fencers will choose to specialize in only one of the three major disciplines although trying multiple ones is a good test of mental aptitude.

Based on Italian variations of smallsword fencing later heavily refined by the French, fencing as we know it today has historical roots in traditions of dueling. Because of this Olympic fencing is often recognizable in historical media, even if it’s not historically accurate for those time periods.

No longer used for self-dense, or even in defense of one’s honor, Olympic fencing is considered a recreational sport today. Considered by many to be an art form, this is a more precise form of swordsmanship.

You can learn more about the finer differences between HEMA and Olympic Fencing in our related article about the topic.

This form of swordsmanship is largely based on patiently reading one’s opponent. While fencers often find themselves moving, they typically do so less than in other forms of swordsmanship. However when they move they explode in a burst of speed that utilizes several muscle groups, as the objective is to strike the opponent before they can strike you.

Because of this fencing may be recommended more for cardio than bulking up in muscle mass, although the foil does use a slightly heavier weapon than the two disciplines. Yet it has nowhere near the weight of the fencing swords used by historical fencers. Also because of the limited space that Olympic fencing is performed in, there is significantly less movement than in other forms of swordsmanship such as HEMA and Kendo.

Olympic fencing is of course the most popular form of swordsmanship practiced today and it is easier to find a club than for other styles.

Kendo is known as the “way of the sword.” Spiritual in its regard for the art of ancient Japanese swordsmanship, Kendo hearkens back to the Samurai tradition of old although the form it is practiced in today is less historically accurate. Regardless it is one of the most popular forms of swordsmanship practiced in the world today and enjoyed by many.

Uniquely, Kendo is practiced popularly in Japan although it is also studied around the world today by many non-Japanese. Inspired by what is known as kenjutsu in Japanese, or simply swordsmanship, Kendo fighters utilize bamboo training swords called shinai for trained combat.

Like fencing, Kendo fights are one-on-one, incorporating traditional equipment, stances, moves, and more. However, unlike fencing, Kendo utilizes a two handed sword, making the sport require more specialized protective equipment to deal with the strength of the blows.

Despite popular misconceptions the form of Kendo practiced today is inspired by but not rooted in the complete forms of historical Japanese swordsmanship. For more information on how modern Kendo has changed over the past century to be more sport oriented please read our article, HEMA Vs. Kendo.

Although Kendo is not as historically accurate to ancient swordsmanship traditions as it could be, make no mistake it still requires a high degree of athletic ability in order to perform well in competitions.

Those looking to incorporate Japanese swordsmanship into their physical routine may find they will achieve the best possible results through Kendo. as it is the easiest form to find a club to participate in In theory Kendo is meant to promote vigor and discipline in one’s spirit through crafting a strong mind and body.  Because of this, Kendo is as physically intensive as it is mentally. Utilizing a wooden sword-shaped in the form of an ancient Japanese katana sword, blows are meant to be dealt forcefully and purposefully.

A sword fighter in Kendo yells out a shout when striking their opponent, meant to symbolize their spirit. Because of this ferocity special armor is designed for practicing Kendo, which in turn can weigh practitioners down and restrict movements. This is part of the conditions of the sport that increases physical requirements, encouraging a good workout.

Dealing precise and intense blows while frequently moving in order to dodge one’s opponent, Kendo is a serious and very physical combat sport. Those who practice Kendo can expect to endure long bursts of cardio and intense muscle movement, cultivating an all-around effective routine.

As stated above, there are many and varied forms of swordsmanship, each with their own unique physical benefits. Because of this, those looking to become stronger or engage in cardio through swordsmanship will likely be able to find a discipline that works for their fitness level and goals.

What’s more, swordsmanship is a hobby steeped in tradition and history, empowering one to feel like a warrior while practicing their blows, making this an overall cool and unique way to train.

If you’d like to learn more information about sword fighting practices please check out our Learn HEMA page for a guide to learning about the historical weapon that interests you. You can also find more guides we’ve written about other topics at our Helpful Guides page. Feel free to share your thoughts on this article by commenting. You can also join the conversation at our forums or our Facebook Group community.